I can’t believe that it has been over a month since I posted anything in Franklin’s Blog.   Time really doe fly by quickly when you don’t pay attention.  The summer was good here in Brantford, Ontario, Canada eh?  We were busy doing things around the house, we had to rebuild part of our deck and made a permanent shade shelter.  Hopefully we will get more use out of it next year as this summer was certainly not a warm one for sitting outside alot..

Wilson has grown into a good looking young man.  He is almost a year and a half!! And he still has not figured out the bed thang… geesh!! 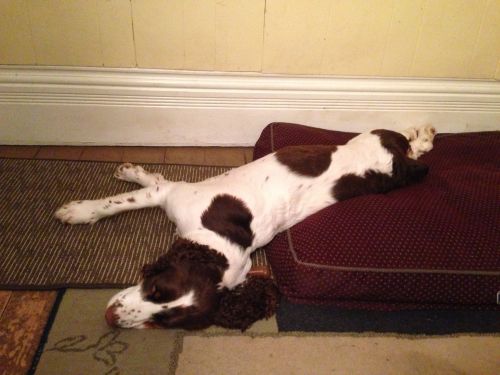 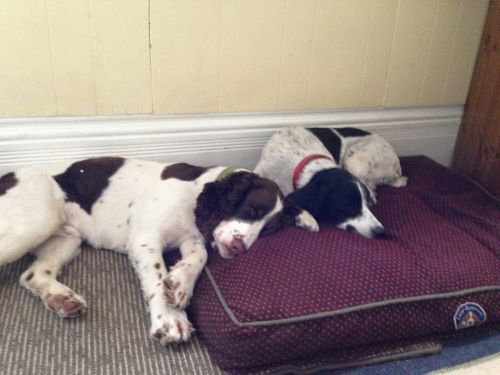 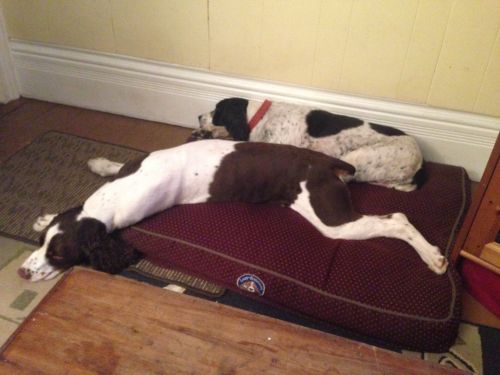 Anyhow.. life does go on…   It really does… and eventually ours too will end…  and like I said before.. I will be trampled at the Bridge, I will be wet and slimy from sloppy kisses, my face will hurt from grinning ear to ear and I cup those sweet faces in my hands and stare into their eyes and say hello again… kiss their brows and thank them for making me who I am today…..

I could say that I can’t wait to see them all again.. but I can.  Because I really don’t plan on “checking out soon” if you know what I mean.  I have too many years left in my life to love and learn from more dogs.  I do plan to have another cat eventually, but not right now.  Diesel and Felix kind of ruined it for any other feline in our house.  As Diesel got older, towards the end, he would do his business in the crawl space and sometimes in our pantry.  Although I caught it, cleaned it… I still think the scent is there in the cement of the floor.  When we adopted Felix,  he was good for a while.. but towards the end, he started peeing in the crawl space, on top of the totes, on the cement floor, and no matter how many times I would reprimand him, he still continued to do it.   He was doing it out of spite because my daughter Jordan was spending alot of time away.. and he missed little kids.   Although I cannot smell anything when I go down there.. I know that another furry little kid can!!

Maggie is not doing well.  She had a fall on last Monday night.. it was all my fault.  I had this “pool float thingy” that was ripped and it was garbage and I put it on the grass behind me.. I went to the alcove to see if there was anything else I could take out to the garbage and her ball was outside it.  She saw her ball and tried to get it and tripped over that stupid pool thing!!  If I haven’t of put it there she would have never tripped!!!   She was yelping and screaming in pain.. and it was the side where she has that damn gap in the bone.  Damn you Osteo arthritis!!   Anyhow.. when I reached for her she tried to bite me…  she was hurting.. and I was crying…   Needless to say.. I got her calmed down.. and carried her inside.  Ice packs, heat packs and rest….  My Fred was up north hunting, and no way of contacting him.

The following morning, she was not using that leg at all.. but did not yelp, or pull back when I poked and prodded.  Part of me said that there is no way this is broken because she would tell me if it was.  I iced more, heat packed more, and we shall wait and see how things go with rest.  We went back to the vets on Thursday and had xrays done.. no breaks, no fractures, but the osteo arthritis has gotten quite bigger.. and the x-rays show the difference.  As well, her heart murmer has gotten quite bad.

So, the vet gave me tramadol for her.  I gave her 1/2 a pill to try her as she has never had it before… and she was comotose!  I didn’t like it.. so I will just keep her on Rymadil.  I kept thinking if she struggled to get up while on that Tramadol, she could hurt herself again.  I called the vet and told her and she agreed to not use it.    It has been a week now since she fell.  Part of me wishes that she would just pass in her sleep, preferably curled up between us with Wilson if you know what I mean.  I would upload the video of her trying to walk on Tuesday outside.. but it is heartbreaking.  I took it to show my Fred just in case something happened and I had to make a decision with him gone.  So instead.. I share a happy picture… with of course her favourite thing in the world.. orange hockey balls! 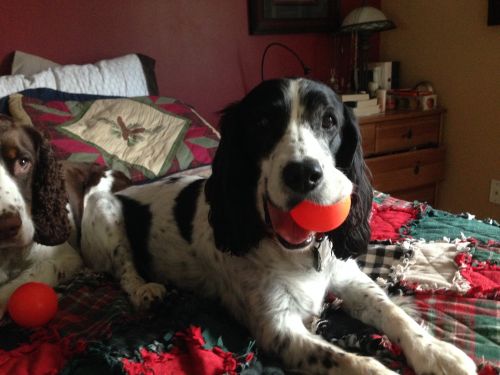 We keep our eyes open for puppies from litters where we got Wilson from.  I think that is the way we will go instead of getting an older dog.  But then again, you never know what will happen in the future..

Wilson keeps us smiling and we are amazed at how gentle and smart this dog is.  He has turned into such a cuddler and snugglebug… He sleeps with us every night.. and I am really not sure if that is a good thing.. but meh.. I’m ok with it….   except when you wake up to his arse in your face… gah!!!  But then again.. it’s usually Fred’s face that his butt faces.. not mine.  So.. meh… I’m ok with it.

I am dreading the day that Maggie meets Franklin and Diesel…  she is the last of the three amigos.. the three stooges…  she’s my girlie girl. And, as pawrents, we will all have those days.. and we accept them.. because we have “Chosen Tears”.  I have been in contact with a vet to come to our home when we are ready….  it could be Thursday this week.. it might be Tuesday next week.. we are not too sure.. but it will happen eventually.

I miss you sweet boy…. always will… and I know you will be seeing Maggie soon.  She will be so happy to see you!!!  When she arrives.. take care of her okay? 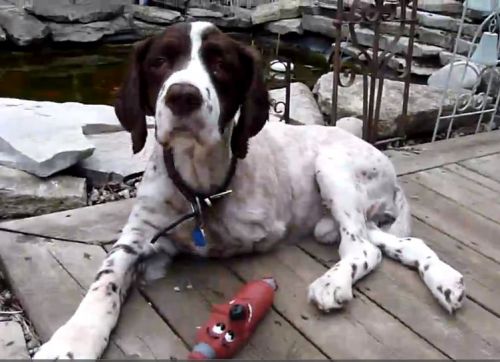 It is going to be so hard having both of you waggin in my heart.