Half the year is almost over… and I have read of so many passings of the sweet pups here in Tripawd Land.  It breaks my heart to read them.. and I cry along with everyone.   I can’t believe it has been over a year since we lost Franklin.. and it has been a year this past Friday, June 13th, that we brought Wilson into our lives.

Wilson, is definitely NOT Franklin… lol  Sometimes I just want to smack people upside the head when they think that they are “trying to replace” their previous furkid.  You never replace them.  Replacing would be cloning.. and I know for a fact that if it could be done.. I would have given it a shot.  Damn straight I would have…   I would have loved to have had Franklin from a puppy.. and watched him grow and spend the next 14 ½ years with him.  Wow… That would have been a gift that could never be repaid!  Would have been worth every penny!

But.. I would not trade Wilson for the world.  He is his own unique character!  He is smart as a whip.. and I honestly think he understands what you are saying when you talk to him.  It’s that “cock of the head” and you know he is processing your words.  It’s either that or he is thinking to himself..  “I have absolutely no freaking clue what you just said but you did say the word “walk” so lets go!!”

So.. what has happened in Springer Land lately?  Well.. we were in the process of adopting another dog to add to our family.  More of a transition period because we know that day is going to happen where Maggie will tear her ass across the meadow to meet Franklin!  So… we went through the process of the interview and home inspection of the English Springer Spaniel Rescue of Southern Ontario.

I have to admit that I do support those foster moms and dads.. they do an amazing job!

We had our eyes on a 4 year old male springer named Charlie.  Charlie was neglected in his life and he had mage extremely bad.  AS well, he had so much ear wax under his ears that it had caked on his ear leather causing him pain and discomfort.  His foster mom Bonnie has had him since early October last year.  He has come so far in his treatments, fur all grown back, just a happy go lucky guy who is finally living to be the Springer that he can be! 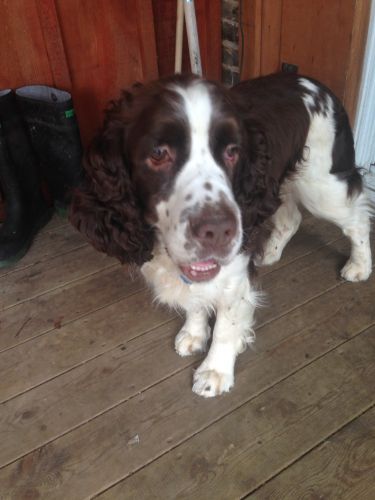 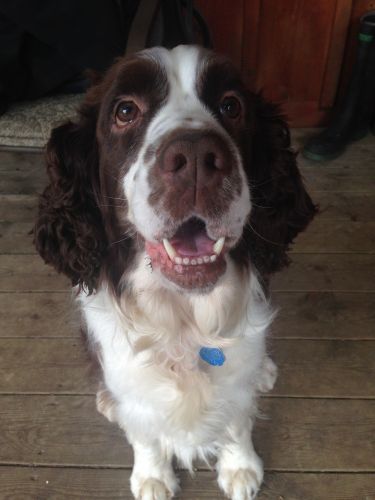 I had been talking with Bonnie through emails and phone conversations and finally came up with a date for us to meet.  May 17th.  It took about a month to finally get her to agree to a meeting time and place.  Sometimes I have a 6th sense about things and something told me in our conversations that she may not have wanted to give him up.  We met at a park area in London, Ontario which was half way for both of us.  Everything was good.. we went on walks, let them sniff each others butts… lol  When we got to the car, the first altercation happened between Wilson and Charlie.  Now.. we know that it takes a while for then to sort out the pecking order.  The second one happened when I had both of them on the leash, one in each hand and I kinda thought to myself.. hmmmm…

But.. we brought Charlie home.  He sat in the front seat and I had Wilson and Maggie in the back with me..   When we got home, we went to the park first instead to let them run around each other instead of going right to the house.  Things were going pretty good.  So we went home…

We went into the backyard and they were loose.  Maggie is just a sweetie girl… and she accepts anyone who comes into our home.. whether it be dog or cat.   Well., all I can say is that by 8:30pm that night, there had been 5 dog fights… and each one was escalating between Wilson and Charlie. Charlie did give a bit of a warning growl to Maggie when she came to close to him, but she just flopped down beside him as if to say “Meh”.

I called Bonnie to check in and ask about Charlie sleeping in the crate at night.  After our discussion, I got his crate ready because I knew that Wilson and him could not be loose through the night… I could just imagine the fight on the bed while we were sleeping!!

Needless to say, 2 more fights by 10:30pm and the last one was pretty bad which resulted in Charlie limping.  I was devastated and in tears… I could not believe this was happening.. but then again.. sometimes it happens.  I knew if I was to just let them go at it to determine the alpha, that someone was going to end up with blood and stitches and that was not fair to either one of them.  Especially poor Charlie.. coming from a neglected home, going to a foster home to be treated great and them going to a home where he is fighting.

So.. I called Bonnie and made arrangements to bring him back.  Then I find out that he did have issues with another younger ma=le dog previously.  I remember her saying that.. but it was just a gruff, ruff, warning.  With Wilson, it was fighting.. going to the throat, tumbling, trying to pin down fighting.

So.. the next morning, when we awoke, we had to keep them apart… two dogs out, 1 dow in and vice versa.  And, at one point, they were trying to get at each other on opposite sides of the sliding glass door in the kitchen!!

Yet.. on his own.. or with just Maggie.. Charlie is such a sweet dog.  Tail wagging, wiggle butt, giving kisses… and all cuddly.  He would be the perfect pet for anyone who did not have a Wilson!!

Wilson, on the other hand, has 10 pounds on top of Charlie and about 1 ½ inches.  I don’t think Wilson likes other males in his territory.  And sometimes, that happens.  He is a ladies man.  Another factor that we weren’t even thnking about is.. .Maggie is weak.  Perhaps Wilson is just very protective at this time with the weak one of his pack there.  Maggie was the same way with Franklin when he was sick.  They protect and defend the weak!

The following weekend, our friends came for a bbq for the day and brought their dog.  Dee Dee is a cock-a-poodle and a female.  Not one single issue with Wilson…  they all ran around and played, chased balls and squeakies!!  Not a single growl, a snarl or a ruff!!  So obviously.. Wilson is a ladies man.

Here is Dee Dee…….. thinking she is dogwood….  lol 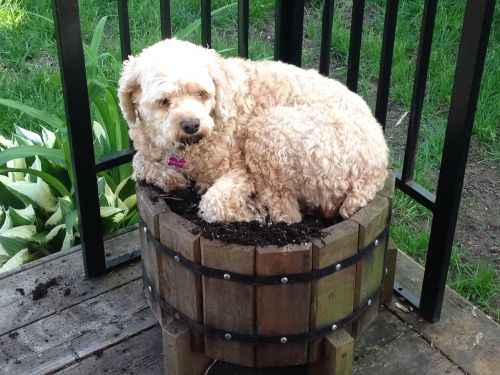 So we have backed away from the adopting and bringing in a third dog right now.    We just smacked each other upside the head when we realized, here we are trying to do good, but could be doing wrong by Maggie as well.  She is almost deaf.. so even if a third dog came in our house and gave a warning growl, she can’t hear it!  If the third dog tried to  snap, she would be unprepared and not able to defend herself.

But… when the time does come, we will be pursuing another female addition.. to appease Wilson.  Lol

So.. that is what has been happening in Springer Land at this time.  The good weather is here… my flowers need thinning so badly I have been transplanting day lilies for weeks now!!

We are still a happy pack…  although Maggie is really slowing down now…  and that is okay… more snuggles.. more pig ears.. and the “ocasisonal” ball throwing party for her keeps her a happy, tail waggin lady!! 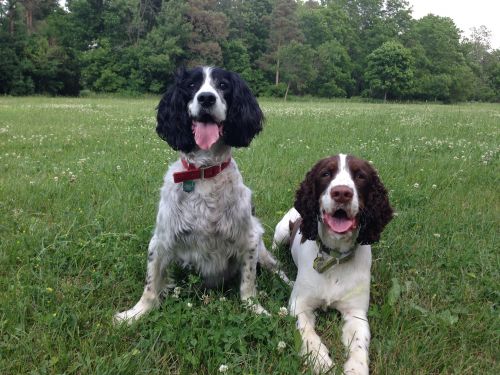 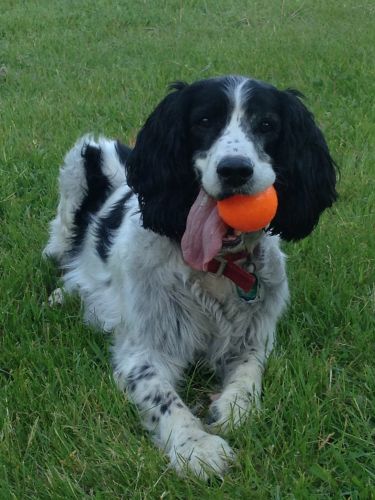