I thought I would finally post a few pictures of Franklin’farter on his tripawd journey….

Here is Franklin one week after his surgery.  He was bandaged up since the surgery and had to go back every 3 days for a bandage change.  This was his second bandage since he came home.  This was on December 10th – his surgery was December 4. 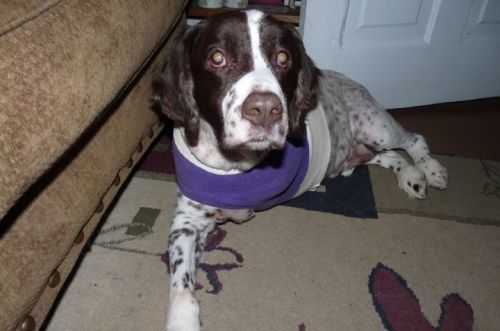 He had no problems claiming his spot on the couch!! 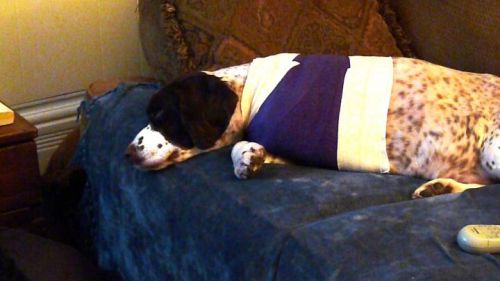 Here he is after his final bandage change.  This would be approximately on December 15th.  I do believe this shows he is felling pretty good!  I have to admit.. one leg less makes for some excellent belly & chest rubs!! 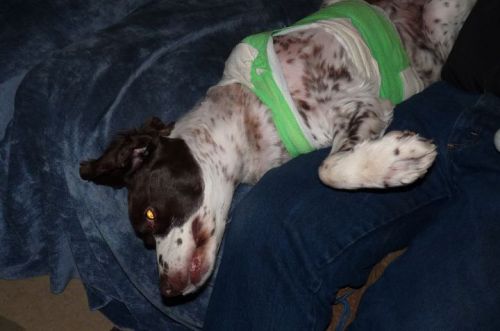 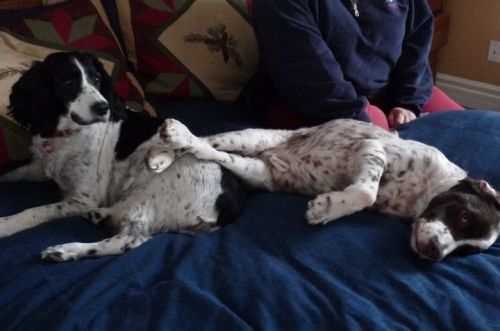 Today has been a lazy day.. the whole weekend has been lazy actually.  I haven’t felt that great this weekend so it has put me into more of a snuggling on the couch kinda mood, which the old fart does not mind!!

I have stopped taking Franklin every day for long walks as I have found that he has been showing signs of weakness?  soreness? tiredness? in his front leg in the evening after our walks.  So we have been limiting our walks to just 15 minutes every other day and spending more time in the backyard walking around, lying on the deck checking for squirrels and hopping up and down the deck stairs.

I guess I am just afraid that his front leg is going to give out.  He does have a bit of a weaker back leg as well , on the right side, from blowing his knee muscles about 4 years ago.  We have come so far and he is doing so great I am selfish in the fact that I don’t want anything to happen to him I guess.  lol    Yet, I don’t want him lying around all the time because then he is not exercising the legs.  geesh.. what a tangled web!

I know that the walks are strengthening his leg yet I don’t want to push him too hard either.  After all.. it has only been 7 weeks since his operation.  But my sweetie did take him for his walk today.. and so far he has been ok…

Just one day at a time is the way I am looking at it, and taking it with a smile.  After all, if we did not go through the with amputation, there is a good chance that maybe he would not be here with us at this time.  Or if he was, he probably would have been in too much pain to be happy to be with us.

I don’t regret the decision to amputate one bit.. The only thing that I do regret is that I should have done it in September when we first found out about the cancer and not waited till 2 months later.

I took Franklin to the vet Friday.  I wasn’t feeling great so I took a vacation day from work and ended up driving down to the vets during the day.  I wanted him to check his incision because I had felt a few hard spots under his incision and just wanted to make sure that everything was ok.

Happy go lucky Frank’n’farter was happy to see everyone.. and when the vet came into the examining room, he left the door behind him open.  Well.. Franklin went out the door and down the hall with the vet running after him.  I just laughed when he brought him back.. I said to the vet.. “he can run faster now than before!”

Needless to say.. everything is fine.  Vet was very happen with the healing, etc and those hard spots were just some scar tissue underneath where the incisions were done for the amputation.  He explained that the swelling was finally all gone and that now you can feel where the skin was stitched inside, etc.    We weighed him and he only weighs 43 pounds.  When he went in for his surgery he weighed 50 pounds.  Obviously Franklin has lost a little weight on top of the weight of a leg.  Which is good, because that is less weight that his front leg has to support.

What can I say.. I’ve never been through this before..  so I didn’t know.  I was afraid it might have been some lumps underneath that may have been bad.  lol  The vet told me no worries.. and to call or come in any time I have a concern with Franklin.

yes… 13 year old dogs can have their legs amputated

yes… they do become so much cuter!

Well..  I haven’t been very faithful to my blog here with Franklin’s progress.  Unfortunately I just don’ t have lots of time in the evening to sit down and type..  and during the day while I am at work is not good.. Big Brother Watches You!!

Franklin’s surgery was 5 weeks ago.. I cannot believe that 5 weeks have flown by so fast.  I did call the vet today because I have noticed that there are some hard lumps underneath Franklin’s incision.  I’m new at this tripawd title and I just want to make sure that it is not fluid build up.  His incision is clear, clean and not red so I am hopefully crossing out infection.  My “vet in my head” tells me that it could just be scar tissue.  But, we are going to the vet’s on Thursday to have a quick check up.

I have been trying to get Franklin out for a walk every day.. and we walk down to the end of our street and up onto the dyke by the river.  This guy loves to walk along side on the hill… maybe he feels balanced!!  lol

We didn’t go for our walk today.. or yesterday…   I think the old fart over did it a bit.  On Sunday night when he went to get up, he kept falling forward.. like his leg was sore, pained or possibly asleep!!   But I did notice that there was a bit of a difference in his “tri-hop” so we just took it easy for a day or two.

That has got to be everyone’s worst fear.. that they hurt the one leg left on that end, whether it be the front or back.  I know it is mine..

Other than the lumps that are under his incision, Franklin is doing pretty darn tooting good!  Ha ha.. pardon the pun.. “toot”  get it?

His appetite is good, bowels are good and he has almost got it down pat on how to hold a treat with his one paw so he can chew on it.  Otherwise, he goes and lays down in the snow and uses the snow to help him hold it.  lol

I have a few videos of Franklin that I am going to try to upload.  I tried to upload the one video of him at 3 days after surgery and it just did not seem to work.. geesh.. I am not a computer genius at the least!